Jean-Yves Glain joined Amundi in 1995 and is currently in charge of the Supervision of Amundi’s Joint Ventures and in the Retail Clients Division.
Previously he has been Head of Internal Support and Marketing Intelligence Departments and JV supervisor – Support and Development Division.

Beforehand Jean-Yves Glain has been General secretary of Support and Development Division, after being in charge of Amundi international development and the global supervision of the international entities for 12 years. Over the previous seven years the latter had taken up several positions starting as Head of Institutional Sales team from 1995-1998 and then became Head of Institutional Marketing from 1998-200. Later he was promoted to the position of Deputy Head of International Co-ordination and Sales from 2000 to 2001.

Prior to joining the firm, Mr. Glain spent five years as Head of Institutional Sales with Cyril Finance. He also was a member of America as Account Officer from 1985-1987. 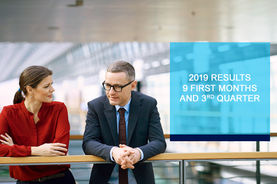